TAORMINA AND CATANIA OF SICILIA, AT THE FOOT OF THE BUSIEST VOLCANO IN EUROPE 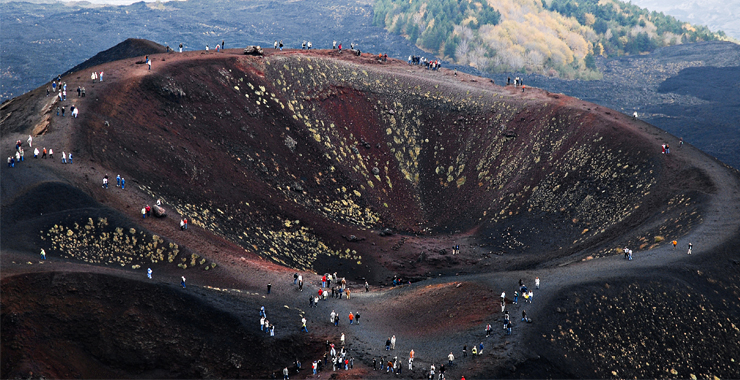 For Tourists seeking a great vacation in Sicily where they can sunbathe on a pebble beach overlooking the beautiful Lonian Sea, or have a little adventure and hike up to the highest active Volcano in Europe, Taormina and Catalina on the Sicilian east-coast are the perfect destination.

THE TOWN OF TAORMINA

Nestled into the high cliffs of Monte Tauro, Taormina is a picture-perfect town of ancient ruins and natural havens, with it being an Italian village; it’s bursting with friendly faces, laid-back delightful locals and so much food.

There’s no shortage of places to see and things to do in Taormina, Privileged with a warm weather all year round, a land steeped in history with ruins and multiple attraction, rural green countryside and long sapphire blue coast, This Sicilian town will give you the full package for an amazing holiday.

Spend your days wandering through the diverse historical attraction, like the Roman medieval mansion Palazzo Ciampoli, the Greek amphitheater located on the top of a hill giving a marvelous view of the sea stretching into the horizon and the Mythical Saracen castle ruins perched on top of a rocky cliff giving a stunning view from above.

Stroll along the medieval town, passing through The Porta di Mezzo a magnificent clock-tower, Baroque fountain and the 15th century cathedral, the town is a beautiful place to wander, with its Arabic-inspired houses, amber churches and colorful markets.

At the center of the Taormina coast lays Isola Bella -aka The Pearl of the Ionian Sea- a tiny island attached to the mainland by a bed of pebble stones and sand, a haven for swimmers and divers.

THE TOWN OF CATANIA

Catania is the second largest city in Sicily with a history so interesting that you can learn about while strolling along its streets. From multiple invasions by Empires like the Greek, Spaniards, Romans and Arabs to multiple Volcano eruptions from the most active volcano in Europe—Mount Etna—that destroyed the city in 1693, this city has gone through so much that it became a land of resilience and a fascinating place to visit

Similar to Taormina in beauty and history, perfect for art lovers with monuments like the Piazza Stesicoro a Roman amphitheatre dating back to the 2nd century AD, and multiple Baroque monuments.

To truly make your holiday in the east-coast a once in a lifetime journey, go on an adventure to Mount Etna, Europe’s largest active volcano. Just over 3,000m high, once you get to the top, you’ll forget that life even exists down below.